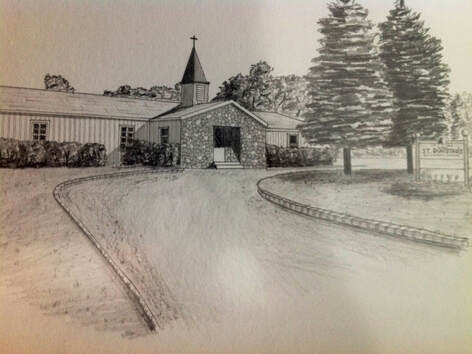 ​In the autumn of 1963 a core group of dedicated Episcopalians from St. John’s Church, Dover, and others scattered throughout the Roxbury Township area met to organize a mission of the Diocese of Newark to serve Episcopalians and other Christians in that portion of Morris County west of Mendham and Dover, south of Mt. Arlington and Stanhope and east of Hackettstown. Under the firm leadership of The Rt. Rev. Leland Stark, then Bishop of Newark, and the personal attention of The Rt. Rev. George Rath, then Suffragan, Sydney Grant, Archdeacon for Missions, and Lubin Palmer, Treasurer of the Dept. of Missions, a site was chosen in Succasunna. A candidate for Holy Orders, Mr. Thomas Henry was chosen to oversee the congregation and the mission was given the name of a tenth century Abbot of Glastonbury and Archbishop of Canterbury, Dunstan.
The first services were held on September 22, 1963 in the High School (now Eisenhower Middle School), but the congregation, with an enthusiasm which was to characterize the mission, built a church building with their own hands and services were conducted in that Church in January 1964. Father Henry was ordained priest in September 1964 and became the first Vicar of Saint Dunstan’s. He left the area in the spring of 1967 and The Rev. Robert Mason became Vicar in August. On January 2, 1980 the congregation completed the long process of incorporating as a parish and Fr. Mason was elected Rector of the Parish on The Feast of the Epiphany, January 6th.